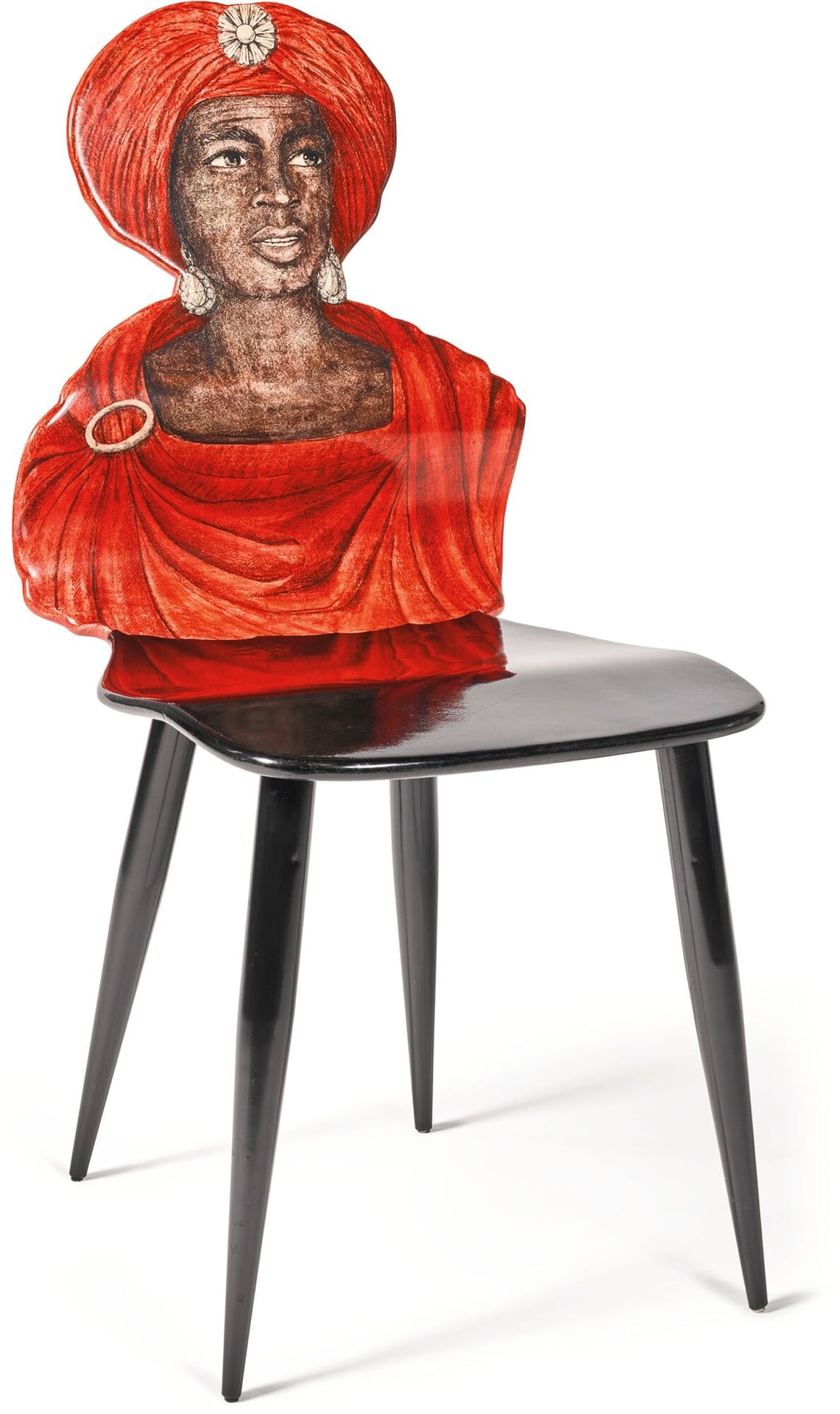 FORNASETTI FURNITURE: A RARE PROTOTYPE OF THE ICONIC 'MORO’ CHAIR

An astonishing blend of artwork and functional design, the Moro Chair could only have been designed by one man: Piero Fornsasetti. The Italian designer’s unconventional aesthetic is unmistakable. Witty and surreal, yet still utterly glamorous, only Fornasetti did Fornsasetti.

Fornasetti Furniture at its bizarre best, the Moro chair’s exquisite form is, nonetheless, classic mid-century. Comprised of lacquered and enamelled plywood and metal, its subtly curved seat and distinctive needle legs are typical of contemporary 50s furniture. But as was the Italian artist’s way, that’s where the similarities end! Described as “a metaphysical tribute to the charm of exotic atmospheres”, this flamboyant red chair offered a delirious new take on modernist design.

Created in the late 1950s, the Moro chair was conceived as an occasional chair to be placed up against a wall as a fantastical, albeit functional, work of art. This extremely rare prototype is of the chair’s ultimate design stage. Constructed entirely by hand, right down to the hand-painted and lithographically printed transfer seat, it is as complete a work as the finished production piece that followed.

Deemed an “archetype of furniture and design that could not be missing from Fornasetti’s repertoire”; more than 60-years on from its conception, the Moro chair is still in production. New Moro chairs currently retail for $5,200: virtually identical in design, this chair is the original prototype from which they all stem. Exceptionally unusual, it’s the only one of its kind that we, along with our auction-house colleagues, have ever seen.

Offering impeccable provenance and connoisseurship, the chair’s place in Fornasetti history is undisputed. For collectors of unique mid-century design, this is a fabulous opportunity to own both a fascinating piece of Fornasetti furniture and a distinctive work of art.

To find out more about the Moro prototype chair, including how to make it yours, please contact Janus Arts . From organising a virtual or in-person viewing to answering any questions you may have, we’re happy to help.

Born in Milan in 1913, Piero Fornasetti swam against the tide from an early age. Having refused to follow his father into the family business, he enrolled at art school but was expelled for insubordination. Undaunted, he enrolled at a second college — but, compared with his own imagination, found it horribly stifling and uninspiring. (Hardly surprising, frankly.)

But while Fornasetti refused to mute his artistic vision to match that of others, in Giovanni “Gio” Ponti (the Italian architect, designer, artist, writer and publisher), he found the perfect partner. The duo met in the early 1930s when Fornasetti was still a printmaker. During a creative relationship lasting several decades, the two men developed an interior design technique unlike any other.

The duo’s design philosophy centred on “the particular usefulness of rooms and furniture”; “the straightforwardness and genuineness of structures and materials”; and the importance of “sun, air, and light”. Significant large-scale commissions included the Dulciora emporium in Milan, the Andrea Doria ocean liner, and the San Remo Casino. Together, their incomparable vision paved the way for the world-famous Fornasetti brand that would follow.

At a time when modernism’s pared-back simplicity was all the rage, Fornasetti focused on the ornate, fanciful, and fun. With the opening of Atelier Fornasetti in the 1950s, the brand quickly became famed for its playful, surreal twist on interior design staples. Plates, chairs, cushions, umbrella stands — all sorts of everyday objects were given a ‘Fornasetti facelift’ and transformed into individual works of art. Drawing on Renaissance, Baroque and Rococo themes, Fornasetti’s wonderfully embellished, adventurous creations had more in common with the lavish sets of stage designers Oliver Messel and Tony Duquette than the populist designs of the day.

But for all his eccentricity, Fornasetti was a prolific artist. Of the 13,000 plus individual pieces that he created, each was designed to challenge and provoke. Often his works featured recurring motifs, with animals, architecture and astronomy as popular themes. However, the blankly beautiful face of the 19th-century opera singer, Lina Cavalieri, proved Fornasetti’s primary muse. “Tema e variazioni” saw Cavalieri’s portrait reimagined in countless unusual ways. From happy, sad or sleeping Linas to Lina surreally reinvented as an apple, egg-timer or butterfly, there seemed no limit to Fornasetti’s obsessive ingenuity.

Although the two never met, ‘Lina’ became Fornasetti’s most memorable sequence of works through sheer volume alone. Even the man himself mused: “What inspired me to create more than 500 variations on the face of a woman? I don’t know, I began to make them, and I never stopped.”

Original individual works from the series saw the singer’s ever-changing image applied to hundreds of ceramic artworks (most notably wall plates). Nowadays, the ‘Lina’ range includes all manner of household items, including teapots, tables, clocks and even facemasks!

As a printer, graphic designer, interior decorator, illustrator, furniture maker and ceramicist, Piero Fornasetti’s influence on product design has extended well beyond the 20th century. Ultimately, though, his overriding legacy is one of uninhibited self-expression — that, no matter what you create, your truth is everything. Under the stewardship of his son, Barnaba Fornasetti, his joyful, eclectic genius continues to impact and inspire to this day.