Enquire
The inimitable British artist revered for her physical, fearless use of oil paint; Maggi Hambling's powerful, emotionally charged landscapes and seascapes are increasingly sought after. An early precursor to the artist's highly acclaimed 'North Sea' paintings, this untitled and uninhibited work (created during the period of her Orwell Estuary series) exudes a turbulent energy that is singularly Hambling’s own.

To some, she’s a National Treasure; to others, a complete conundrum. With Maggi Hambling, CBE, there’s no halfway house. Throughout a career spanning more than half a century, she’s remained as uniquely, eccentrically British as, well, Marmite*…and almost as divisive.

With her piercing gaze, unruly thatch of hair and ever-present cigarette (a champion of freedom of choice, she won’t be photographed without one), Maggi Hambling cuts an imposing figure. The renowned painter and sculptor turned 75 this year, but, thankfully, shows no signs of fading gently into her dotage. Rather, she continues to cause quite the furore, as with her recent sculpture commemorating the pioneering feminist, Mary Wollstonecraft. An abstract, silver mass, culminating in a small, nude ‘everywoman’ figurine; the memorial’s been criticised as inappropriate and egotistical by some. Hambling’s responded by stating the statue isn’t of Wollstonecraft, but “for” her, adding, “I need complete freedom to respond to the spirit of my subject and could not work if constrained by convention or preconceived demands”. Inarguably, the statue’s raised Wollstonecraft’s profile to new heights (hello, Instagram); but the jury’s still out on the tiny silver-surfer, whoever she is .

Give it time. Hambling’s best-known public works are, for some, a taste acquired over months, if not years. ‘The Scallop’, her magnificent tribute to Benjamin Britten, was vehemently opposed and regularly defaced when it first appeared on Aldeburgh Beach in 2003. (“If I’d wanted graffiti on this sculpture, I’d have put it there in the first place” Hambling retorted.) Nowadays, the 4-metre-high, fractured, steel shell is considered iconic and much-adored. Ditto Hambling’s ‘A Conversation with Oscar Wilde’. A playful London monument to the Irish poet and playwright; it, too, was initially deemed disastrous and silly, but has bedded in well with age .

Hambling’s love affair with oil paint started at the East Anglian School of Painting and Drawing, where she studied under Cedric Lockwood Morris and his partner, Arthur Lett-Haines. Described by Hambling as the “bohemian second home” where her life truly began; Morris’ physical, fearless way with paint and Lett’s insightful tuition and mentorship were hugely transformative.

“Lett was the most terrific teacher,” recalled Hambling in a recent BBC-documentary. “He said the most important thing that anyone’s ever said to me: that if I was going to be an artist, I had to make my work my best friend. Whatever I was feeling — sad, happy, bored, randy — whatever I was feeling I could go to my work and have a conversation with it, and that is actually how I’ve lived the rest of my life.”

Further studies saw Hambling move to London: first to Camberwell and then the Slade School of Art. For the young, lesbionic (her term) artist, Soho in the swinging sixties proved metamorphic; not least because it was here, at the notorious Colony Room Club, that she met Francis Bacon. The figurative painter’s raw, unsettling style and increasingly heightened use of colour proved a major influence. Even today, the leitmotifs of love, life, lust and death — themes so synonymous with Bacon — persist throughout much of Hambling’s work. (Like both Bacon and the late, great Lucian Freud, Hambling is also represented by Marlborough Fine Art, London.)

Monuments aside, the Suffolk-born artist is best known for her powerful seascapes, landscapes and animated portraits. Hambling grew up in ‘Constable Country’ and feels a strong affinity with the famed 18th-century painter. Throughout her oeuvre, she’s constantly sought the same truth of subject for which John Constable was so celebrated; and it’s this honesty that’s so apparent in her series of North Sea paintings. 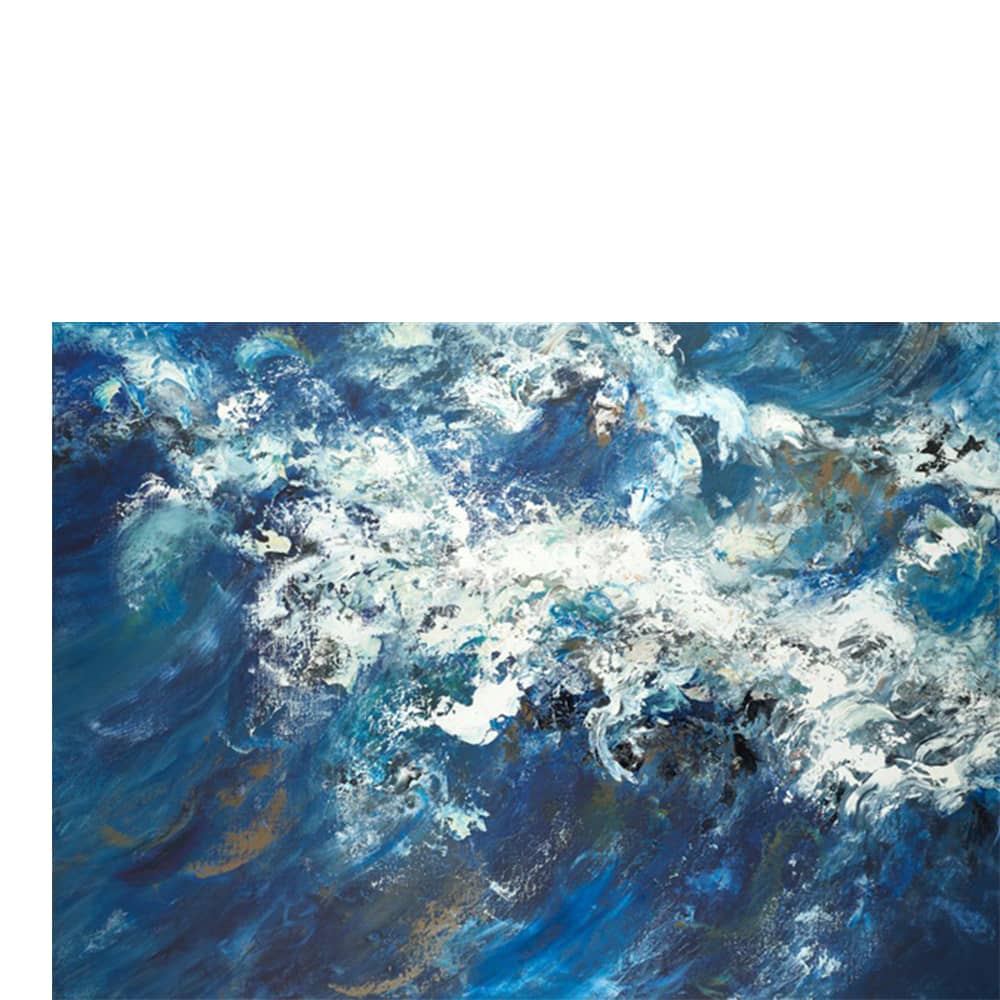 Hambling (who splits her time between London and Suffolk), has been painting the waters off the East Anglian coast since 2002; going down to the sea early each morning to draw its ever-changing mood. Back at the studio, the drawings become paintings, with Hambling striving to capture the waves’ constant movement in the paint itself. No matter the size of the work — some are tiny, some vast — Hambling’s use of oil paint exudes a great life force of its own. There is enormous power and energy in these works; their wild ferociousness amplified by the swirling layers of paint so indicative of Hambling’s later style. “I’m perhaps doing for the sea what Constable did for the sky,” the artist has mused.

Despite the controversies, Hambling still ticks some exceedingly large ‘establishment’ boxes. In 1980, she became the first Artist in Residence at the National Gallery in London. Regarded at the time as an extraordinary event, Newsnight’s coverage of Hambling’s inaugural day revealed another side to the famously fierce artist, who confessed that the idea of being “on the spot” in front of inquisitive gallery-goers left her feeling “extremely vulnerable’.

Winner of the prestigious Jerwood Painting Prize in 1995 and awarded a CBE in 2010, today Hambling’s work features in the collections of the Tate Gallery; the National Portrait Gallery; the British Museum; the Victoria and Albert Museum, and the Scottish Gallery of Modern Art, among others. Additionally, she has exhibited at the National Gallery; Hermitage St Petersburg; Serpentine Gallery; Yale; Marlborough Fine Art and Frieze London; the latter as part of the Tracey Emin-curated ‘Another World’ exhibition.

In recent years, Maggi Hambling paintings have repeatedly surpassed auction guide-prices by a sizeable margin. Indeed, notable sales in 2019 and 2020 saw works achieving two to three times their high estimates. Whether she likes it or not (!), Hambling is undoubtedly transitioning from a hugely respected British artist to a global artist with universal appeal. Now an inspired choice for international collectors of contemporary art; whether you’re drawn to Hambling’s work purely by its intense, unbridled power, or you’re also seeking an astute investment, this is the time to dive in.

Janus Arts has several Maggi Hambling paintings within its current collection and is experienced in brokering sales of her artworks. If you’d like to find out more about the available works , or are contemplating selling your own, do get in touch as we’d be delighted to help.

* For the uninitiated, Marmite is a sticky, brown, savoury spread made from yeast extract, developed in the UK in 1902. It has a strong, distinct, salty taste that you either love or loathe.